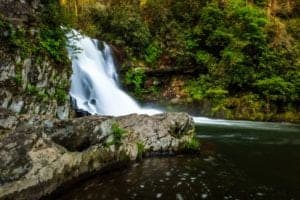 If you enjoy hiking and want to stretch your legs after riding around the loop, you should make your way to Abrams Falls! The trailhead is right past stop #10. This hiking trail is 5 miles roundtrip, making it a more moderate trip. You’ll make your way through old forest growth and might even see wildlife along the way! Then you’ll come up on Abrams Creek and then the waterfall, which stands 20 feet tall. Even though it is short compared to other falls in the park, the amount of water that flows over the falls is impressive.

Many people enjoy stopping and seeing the white churches along the Loop. The Methodist Church is a modest white building with the two-door design on the front, which was common at the time the church was built. The inside of the church is plain, with wooden pews and a small piano. Right outside the church is a graveyard. Another popular church in Cades Cove in the Smoky Mountains is Primitive Baptist Church. It was established in the 1820s. Before the building you see now was constructed, members would use members’ homes to meet. The structure you see today was built in the 1880s. Primitive Baptist Church looks very similar to the Methodist Church but only has one door to get in and out instead of two. The interior is completely constructed of wood, including the pews.

Another popular place in Cades Cove in the Smoky Mountains is the Cantilever Barn at Tipton Place. This design was popular in the 19th century, specifically in Sevier and Blount counties in Tennessee. The cantilever part of the barn is an overhang that supports a second-story loft atop one or more log cribs on the base story. 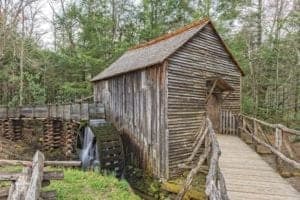 The Cable Mill in Cades Cove was built in the 1870s by John P. Cable. It was one of the most important structures in the community because it was used to grind corn and wheat into flour for food. Not only was the mill used for this, it was also used to cut lumber. The wheel on the mill was replaced in 2018. You can actually purchase corn meal that has been ground by the mill!

There are several home structures in Cades Cove, including the Elijah Oliver cabin. You are allowed to walk around and inside this homestead, seeing what living in the cabin would have been like and how it was built. In addition to the cabin, the homestead includes a chicken coop, smokehouse, corn crib, and springhouse you can explore!

Cades Cove in the Smoky Mountains is full of cool places you’ll want to see. What else are you going to do when you stay with us? Check out these Gatlinburg attractions for even more ideas!